The streets of Dublin were crowded as thousands of us gathered to watch the Easter 1916 Centenary Commemoration Parade. The day was bright and dry as the massive crowds made their way along the long parade route which led towards O’Connell Street. There were wide screens to display the formal ceremony outside the GPO, as the main street of Dublin city was reserved for family member and relatives of those who fought in 1916.

The parade of the Irish Defence Forces received huge cheers as they passed us, army bands, navy services and all types of military vehicles. President Michael D. Higgins, Taoiseach Enda Kenny, Dublin’s Mayor Criona Ni Dhalaigh and the Minister for Defence, Simon Coveney, all received a warm welcome on this very special day. Everyone watched and was moved by the reading of the Proclamation by Captain Peter Kelleher outside the GPO, the lowering of the Irish tri-colour flag and the army band playing Mise Eire.

Reading of the Proclamation Easter Sunday 2016

The whole city stood still to remember that day a hundred years ago when a small band of rebels took the GPO and declared an Irish Republic. The Irish Air Corps with their plumes of green white and orange flew over O’Connell Street which brought huge cheers from everyone watching below. This important part of our history was honoured, the brave men and women of 1916 were recalled and their effort to fight for Irish freedom commemorated on this very special Easter Sunday 2016.

On Easter Monday, the city was transformed for RTE’s large scale event organised for families and all those with an interest in the Rising.
Artist and writer Don Conroy and I were delighted to take part. We gave two 1916 story and drawing workshops in DIT College, Aungier Street, (site of the former Jacob’s biscuit factory and the garrison led by Thomas MacDonagh and Captain John MacBride during the 1916 Rising).

There was fun and hundreds of events and talks on all aspects of the Rising and re-enactments by drama groups with packed events in O’Connell Street, Smithfield and St. Stephen’s Green. Alongside the family activities and entertainment in in St Stephen’s Green, there was the poignant reminder by a children’s drama group of all the children who died during the Rising.

The skies stayed bright and sunny and the marvellous events of the weekend were finished off by RTE’s Centenary concert, broadcast live that night from the Bord Gais Theatre.

It was a weekend to remember and a fitting tribute to Padraig Pearse, Tom Clarke, James Connolly Sean MacDiarmada, Thomas MacDonagh, Eamonn Ceannt and Joseph Plunkett and all those who went out a hundred years ago, on that Easter Monday 1916. 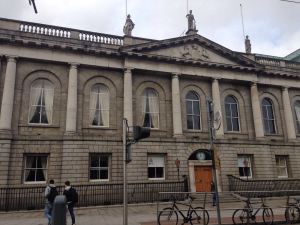 Royal College of Surgeons in Ireland

The Royal College of Surgeons in Ireland, a large medical school to train doctors and surgeons, has stood on St Stephen’s Green, Dublin for over 200 years.

On Tuesday the 25th April 1916, the nationalist rebels were forced to flee under heavy machine gun fire from St Stephen’s Green Park to the nearby large, imposing medical school.

Countess Constance Markievicz had managed to gain access to the college by threatening the college porter with her gun. He and his family were locked up in their quarters as Commandant Michael Mallin’s company took over the building. They put snipers up on the roof and raised the Irish tricolour flag.

The medical college was closed for the Easter holidays so there was very little food or supplies in the building. Commandant Mallin, a former British soldier who had served in India, organised his garrison in an orderly military fashion. The garrison however came under immense fire as the British moved three heavy machine guns and gunners on to nearby roofs to attack them.

Desperately short of food, Nellie Gifford and the other women in the garrison kept up a constant search to find new food supplies, raiding nearby buildings.

Margaret Skinnider was shot during an attempt to disable a nearby British machine gun post and was brought back to the college for medical treatment for her wounds.

As the situation worsened, Chris Caffrey and Nellie Gifford were dispatched to the Jacob’s Biscuits factory to request much needed food and ammunition supplies for their garrison.

A cache of sixty rifles belonging to the college’s Officer Training Corps was found in the college, but the exhausted and hungry men and women in the garrison were under constant heavy attack from the surrounding British forces.

On Sunday morning, 30th April, Nurse Elizabeth O’Farrell – carrying a white flag – came to the college with orders from Britain’s General Lowe and the surrender order signed by Padraig Pearse and James Connolly. She told them that the GPO had fallen and that they must agree to surrender.

With heavy hearts and great reluctance, Michael Mallin and Countess Constance Markievicz agreed to surrender. They took down the Irish flag from the college roof and hid it inside Margaret Skinnider’s coat before she was transported by ambulance to a nearby hospital.
As they left the college building, Major De Courcy Wheeler could not believe such a small group had manged to withstand such heavy attack from his forces.

A hostile crowd jeered and taunted them as they were marched through the streets to Richmond Barracks, led by Michael Mallin.