President Michael D. Higgins came to Cloondara to celebrate and mark the Two Hundred Year Anniversary of the opening of The Royal Canal, which has been restored and is an important part of our waterways. He also launched the National Famine Way Walk which follows along the Royal Canal from Cloondara in County Longford to Dublin.

The National Famine Way commemorates the 1490 evicted tenants forced by  landlord Denis Mahon of Strokestown  Park House in Roscommon to walk to Dublin to board ships that would take them to Liverpool and then on to Canada in May 1847. Many unfortunately perished on the arduous journey.

Young and old, women and children, the evicted tenants, who were being escorted by a bailiff, had to be given shoes to help them walk as they did not even possess any of their own.

President Higgins spoke movingly to the large crowds about The Great Irish Famine and all those who were forced to emigrate.  He unveiled a sculpture of a bronze pair of child’s shoes to represent the 1490 tenants, before sending The National Famine Way Walkers off on their five day journey. 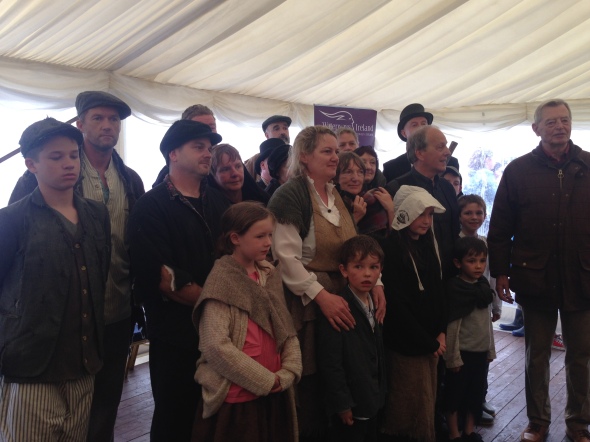 I found it strangely emotional to watch The Famine Way Walkers as they are a grim reminder of all those who footsore and hungry had to make such journeys during Ireland’s Great Famine.

The walkers include Caroilin Callery of Strokestown Park House and a number of Irish Famine academics and experts who set off in torrential rain on their long 155km walk from Richmond Harbour in Cloondara, County Longford to Dublin’s Eden Quay.

I am hoping lots of walkers and walking clubs, schools and students and history lovers will come out to join them on their way.

Check out their route on nationalfamineway.ie