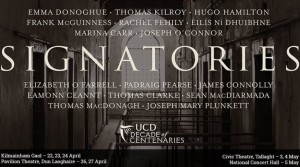 I saw Signatories at the Pavilion Theatre last night and really enjoyed and was moved by this rich, multi layered dramatic reflection on the lives of the seven signatories of the Irish Proclamation and Elizabeth O’Farrell, the young nurse charged with bringing the surrender order from garrison to garrison.

The series of eight ten minute monologues was commissioned by UCD as part of its Decade of Centenaries Programme. Directed by Patrick Mason with writers Frank McGuinness, Emma Donoghue, Thomas Kilroy, Eilis Ni Dhuibhne, Marina Carr, Joseph O’Connor, Rachel Fehily and Hugo Hamilton each writing about one of the signatories.

Emma Donoghue’s piece on an aging Elizabeth O’Farrell – played by Barbara Brennan – recalling the surrender, waving her white flag as she moved from place to place was a strong and most memorable opening to this dramatic and emotive piece of theatre. It was first staged in Kilmainham Jail over three nights and now will be staged in a few more places including the National Concert Hall and the Civic Theatre in Tallaght, a hundred years after the men faced their executions in Kilmainham.

Watching and listening to the last hours and words and thoughts of some of the signatories as they waited in their cells to be executed, certainly brought the humanity and tragedy of the 1916 Rising to life.

The bravery and courage of Padraig Pearse, Thomas MacDonagh, Joseph Plunkett, Tom Clark, Sean MacDiarmada, James Connolly and Eamonn Ceannt, and their belief in a free Ireland certainly deserves to be remembered by some of Ireland’s finest writers.

Book a ticket as soon as you can and hope that Signatories will transfer in time to a theatre near you.