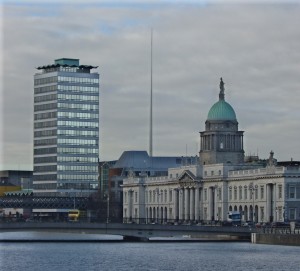 The original Liberty Hall building stood on Beresford place (near Eden Quay) overlooking the Dublin’s River Liffey. It was home to the Irish Transport and General Workers Union which was founded by the labour activist Jim Larkin and was used for meetings and social events.

In 1913 Larkin and the Union called for a strike for better pay and conditions for the thousands of Dublin workers. The Employer’s Federation, led by William Martin Murphy, reacted by locking out the workers and replacing most of them with scab labour.

During the long months of the 1913 Lockout, thousands of workers and their families were fed every day at the Union’s crowded soup kitchens in Liberty Hall run by Countess Markievicz, Maud Gonne and Nellie Gifford. Larkin and James Connolly also set up a workers’ army-The Irish Citizen Amy.

1n 1914 many of the workers had to return to work as Union funds had run out. Nellie Gifford continued to work in Liberty Hall, giving cookery classes and dance classes to its members.

When the war broke out in 1914, the Union hung a large banner across the front of Liberty Hall declaring, ‘We serve neither for King or Kaiser, but Ireland.’ 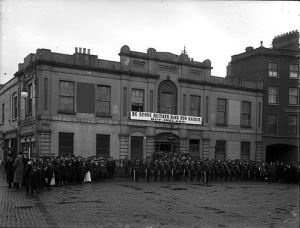 In 1916 James Connolly was running Liberty Hall. Connolly’s Citizen Army and The Irish Volunteers united to plan and fight in the 1916 Rising. Liberty Hall became a hub of operation with bombs and ammunition being made and supplies organised for the rebellion against the British in Dublin. The proclamation was also secretly printed there.

Thousands turned up in Liberty Hall on Easter Sunday 23rd April 1916 only to discover that Eoin McNeill, head of the Volunteers, had issued orders cancelling the Rising. However Padraig Pearse, Tom Clarke, Sean MacDiarmada, James Connolly, Thomas MacDonagh, Joseph Plunkett and Eamonn Ceannt were determined to go ahead with the planned rebellion.

On Easter Monday 24th April, a much reduced army of rebels gathered at Liberty Hall and set out across the city. Padraig Pearse and James Connolly led their large group of men and women towards the GPO. Nellie Gifford marched with her group under Commandant Michael Mallin to take St Stephen’s Green. The Rising had begun.

On Wednesday 26th of April, Dublin was a city was at war. A British gun-boat, the Helga, sailed up the River Liffey and bombarded and destroyed the Union building which was actually unoccupied.

Liberty Hall was later rebuilt and restored but in the 1950s, it was declared unsafe and had to be demolished. The new Irish Workers’ Union headquarters, a sixteen storey glass tower, designed by architect Desmond Ri O’Kelly was finally completed in 1965.

There are plans to replace it though many Dubliners have come to like it. 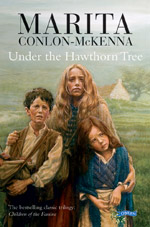